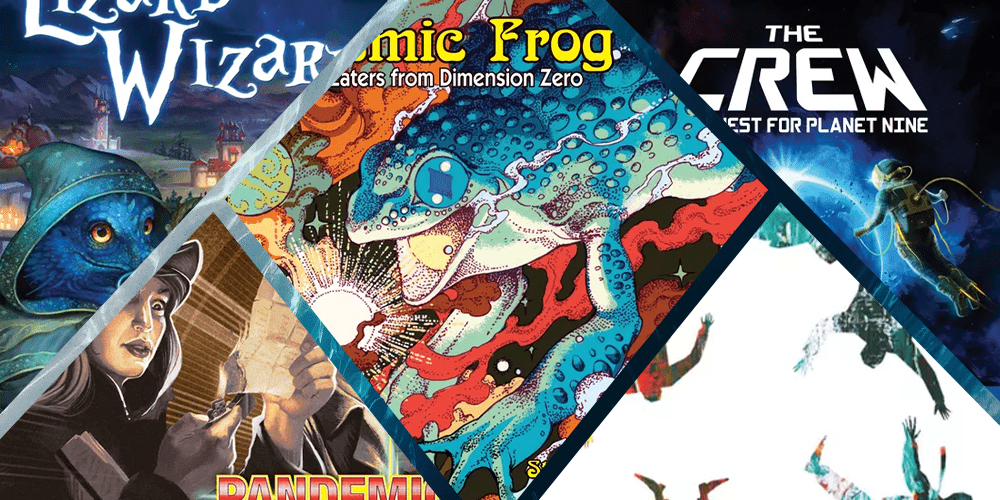 Top Recent Board Games That Try Something New 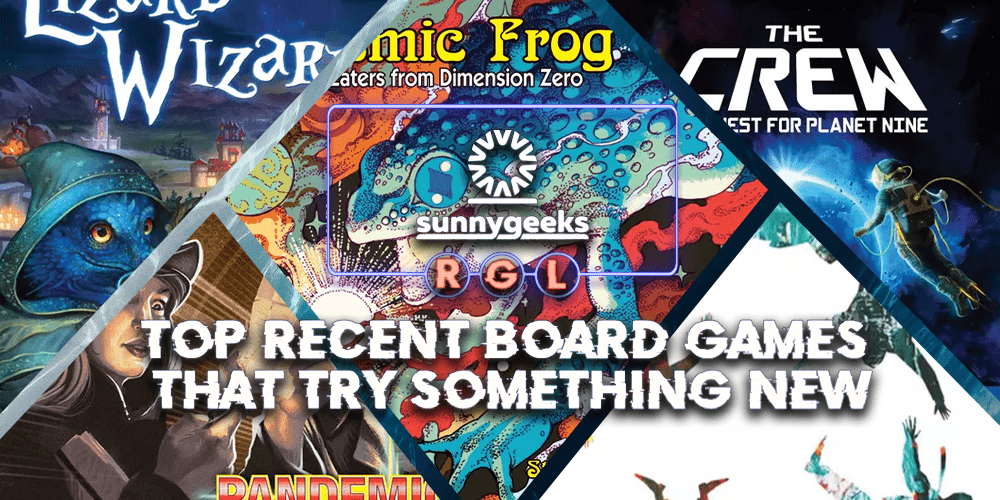 Let’s be honest – gamers are creatures of habit.

But every so often, it’s time to push the boat out and try your hand at something new.

So, here are eight of our favourite games that have attempted to try something…a little different.

With the Frog lies the power

Why not start big. A psychedelic odyssey from the mind of Jim Felli, Cosmic Frog has captured the minds and imaginations of players since it was first announced. Being about giant, fighting, interdimensional amphibians will tend to do that. A game of conflict and competition, Cosmic asks players to romp across the map and hoover up tiles before spewing them back at their home base for points…while your opponents attempt the same. This results in a totally unique game of tactics as you rob opponents, batter enemies, and get kicked into alternate dimensions and hop your way back. Mad as a box of…something. Can’t quite put our fingers on it.

Go back to the beginning!

Sadly (or fortunately, depending on your perspective), legacy games are starting to become part of the scenery. With almost every other game seeming to get legacy mechanics, it takes the mother of them all to show us how it’s done. The third in Daviau and Leacock’s Pandemic series, Season 0 rolls back the clock to the cold war and replaces viruses with spies. Players are tasked with learning more about the Soviet Union’s “Project MEDUSA” (guess how this is going to end up) and about the global game of cat and mouse. With innovative mechanics, compelling gameplay, and unique play opportunities…there’s simply nothing like it.

The step-sister of the wonderful Raccoon Tycoon, Lizard Wizard asks players to become the most powerful (and cutest) arch mage in the land, marrying set-collection gameplay with long-term economic planning. This sees you try and win through a surprising number of options. This includes recruiting a team of wizards from magic houses, gathering familiars, researching, and scrabbling together the victory points you need to cash in for your pointy hat and cloak. With gorgeous card art and refined play, the game is a dream to teach and intuitive to play. And with gamers able to try before they buy by playing through Tabletopia, this is the perfect time to try a game that’s complex, gorgeous, and with a difficulty curve other games dream of.

He did the monster mash~

An entry-level game that’s…actually fun. Horrified is an officially branded co-op masterpiece that lets you and your kids (or group, it’s that good) take on Universal Studio’s iconic creatures of the night. Biting at the heels of Ravensburger’s Jaws, Horrified asks players to work together to best as many monsters as you feel comfortable taking on. This sees you complete minigames that range from smashing Dracula’s coffins, taking on Frankenstein and his bride, brewing an antidote to stop the Wolfman and more. With variable difficulty and an easy teach, Horrified is perfect for any players looking to find a co-op game that provides the right degree of challenge for you and your friends round your tabletop.

Can your team survive in space?

At this point, we’ve all played The Mind – right? A masterful game that combing group building with clever play. The Crew takes that concept of co-operative card-play and shoots it to the moon. Played over 50 ‘missions’, the game asks players o journey through the depths of space and carry out a number of unique tasks. With limited communication options (it is space after all), the game moves from game to game, slowly piling on just enough additional complexity to make each game a challenge and build on what come before and as the story unfolds about the mysterious ninth planet…your group will be calling for ‘one more game’ sooner that you’d ever think.

The fall of civilization in an afternoon!

Getting the group together for a session is easier said than done. Thankfully, Renegade have something just for you. Playable in a single setting, Icarus is a narrative RPG about the rise and fall of a civilization that you and your players create – letting you choose your theme characters, and goals as you enjoy your society’s golden age…that soon crumbles to dust. Built around a unique dice-balancing mechanic, Icarus is a joy for any time-pressed group. Or player who wants to build (and destroy) a universe in an afternoon.

Gale Force Nine deserve all the credit that they get. The kings of adapting franchises to the tabletop (Spartacus, Dune, and Sons of Anarchy to name but a few), the recently released Aliens may be close to their opus. Streamlining dungeon crawl mechanics, the game lets you and your friends play through a truncated version of the movie – pitting you against the xenomorph menace. This includes the ability to link four of those missions together to play one day-long campaign with persistent damage and whatever weapons they can scavenge. And – if that’s not enough for you – picking up any of the two other expansions lets you bring the rest of the Space Marines into play. Or ask the Queen if she wants to say hello.

Will your empire prevail?

Love Game of Thrones? Haven’t got a day or two to spare for the boardgame or a month or so for the series? A War of Whispers, from Starling games, combines all the political intrigue of your favourite fantasy novels into 60 minutes. Tops. Players take on the role of sneaky manipulators as you bet on which side is going to wind a kingdom-wide war. This involves bluffs, counter-bluffs, and top-class manipulation as you try to figure out who your rivals are backing and stop them. While last years’ SUSD review may have made copies fly off the shelves, you can do a lot worse than pick up a copy today.

What refreshing board games did you try recently? Tell us in the comments!