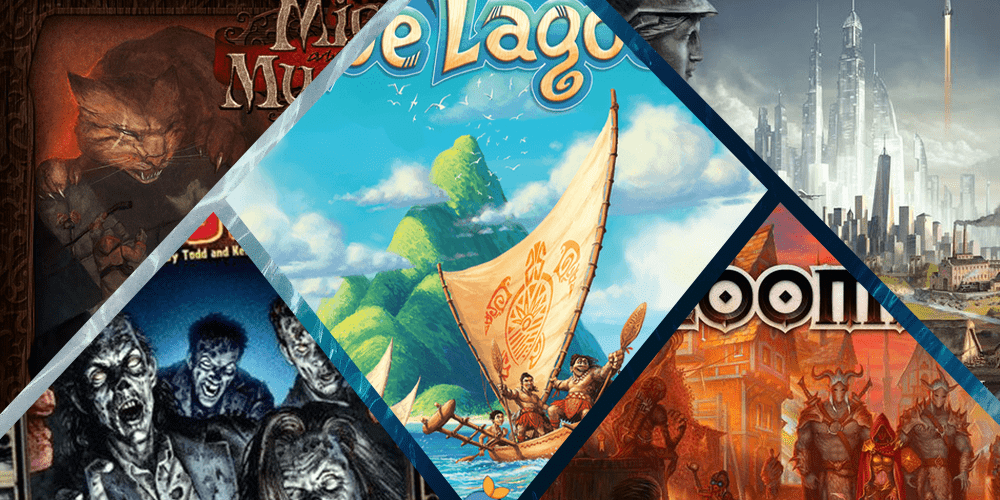 Top Board Games for Exploration 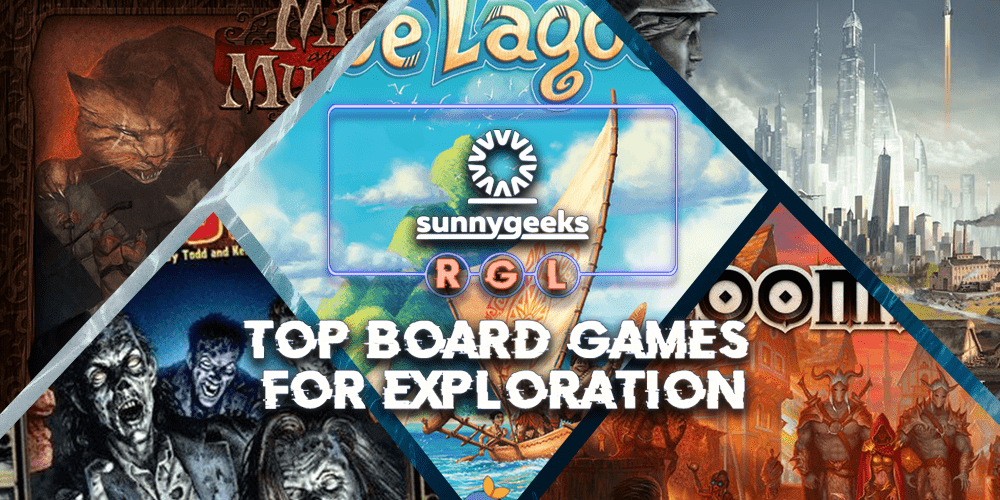 Ever wanted to go on a journey without leaving your table?

Modern board game design is driven by innovation, allowing players to step past ‘roll and move’ antics and enjoy tailored experiences. And for every game that’s about beheading orcs, or optimizing trains, there’s a pick that lets you live out a life of adventure and step into a world well beyond your own.

So, here are eight of our favorite games for bold adventurers out there! Starting with-

Pre-emptively scratching that Moana itch, Knizia’s latest opus captures the movements of sea-faring Polynesian settlers as they come to land, found civilization, and strike out to the seas again. Well…kind of. Marrying strategic movement, set collection, and area majority/control elements, players have to carefully plot a path for their settlers as they try their best to squeeze out the opposition and nabe prime land for their huts. These prove very important as, once the map has been occupied once, the board resets, and players start from their new homes – making each game unique. Throw in bonuses for the longest travel chain, visiting the most islands, and capturing relics – and you’ve got a tight game that massively rewards inquisitive exploration in a way that counts.

One of Wizard’s of the Coasts beloved ‘board game’ boxes, Ravenloft lets players explore the most fearsome location of all…Strahd Von Zarovichs’ ancestral home. Combining 4th edition game mechanics, grad based combat, and beautiful miniatures – Ravenloft lets your group venture into the depths of the castle in a persistent campaign. Here every bite, scratch, and curse matters as you overcome one trap after the next and finally throwing hands with the vampire lord. Offering a steady drip-feed of fresh content, the game is a delight for dungeon crawl veterans or a terrifying start for novices. Just watch out for bats…and necromantic dragons.

What civilization will you develop?

Does exploring the seas or a menacing castle not sound to your taste? Can we interest you in the sum total of human history then? Released in 2017, Civ was praised as a refinement on a previous iteration of the game and a step-forward in accessible 4x design – presenting players with a randomised hex map that they uncover as their influence and civilization grows. And as the world expands, so do your needs. Barbarians are crushed, resources acquired, and competing cultures ‘dealt’ with as your rivals struggle to complete their secret agendas. This makes cartography essential and ensures that it carries the joy of fresh discovery with every session.

If inhabiting a “persistent world of shifting motives” sounds exciting, then climb onboard with Isaac Childres’ ground-breaking adventure game release. Built around exploring (and influencing) a fully realised world, Gloomhaven offers a combat-heavy rpg experience where the DM can join in the fight. Built with legacy mechanics, each of the game’s staggering 95 missions reveals something new about the world, impacts your story, and sheds new light on the murky history of the city. While the game can be a bit of a table hog, Gloomhaven is perfect for groups looking for their next campaign, pick up a copy and carve out your own path in an unforgiving world.

The (un)living definition of a guilty pleasure, Twilight Creations’ best selling series is simplicity itself. Roll to move (sorry), reveal a new piece of the board, and blast your way through a horde of zombies. And when we say horde, we mean horde. What the game lacks in mechanical complexity, it more than makes up for in raw fun. Each session is frantic as you scramble to make your way to the game’s heliport and use every trick in your arsenal as you encounter dead ends, winding streets or worse. Expansions can include military bases, shopping malls, disused schools, and even the book of the dead! Perfect for those who play just to see what happens next, this is killer filler at its finest.

What will you discover next?

Ever loved the world of a book so much you wanted to live in it? Well, sisters, have we got the game for you. Inspired by Fighting Fantasy classics, 7th Continent puts you in the sandals of a plucky adventurer as they set sail to the mysterious island in an attempt to lift a curse. Players pick their way through the land uncovering threats, traps and making use of a wealth of expansion material if required. Combining simple rules with staggering amount of content to hunt down or trip over, the game brims over with adventure and carries a thrill with every journey. All held within a stack of file cards. Neat huh?

A huge epic of tiny proportions!

The game that put Plaid Hat on the map, Mice and Mystics is an outstanding story told at a tiny scale. Playing as a prince-turned-mouse, players take on the role of the lordling and his allies as they battle their way through the castle and to save a land in peril. This asks players to engage in a persistent campaign where they take down everything from cockroaches (goblins) all the way to a fearsome kitchen cat (dragons). Crafted with a storybook aesthetic, players can help but empathise with the princes’ plight or wait to see what part of the castle they end up in next. And any game that uses cheese as an experience mechanic is ok with us.

What’s scarier than a haunted house you ask? Well, what about one that holds different scares every time you enter it and where the monster at the end could turn out to be you. A much loved stalwart from Avalon Hill, the game asks players to explore the floors of a terrifying mansion and – once enough time has passed – trigger ‘The Haunt’. This sees players consulta  book with dozens of options for your finale that can range from grappling with zombies, stopping cannibals, being abducted by aliens and more. A perfect storytelling engine, Betrayal is the perfect beer and pretzels games for players that can’t wait to see what’s around the next turn.

What are your favorite board games to explore? Tell us in the comments!