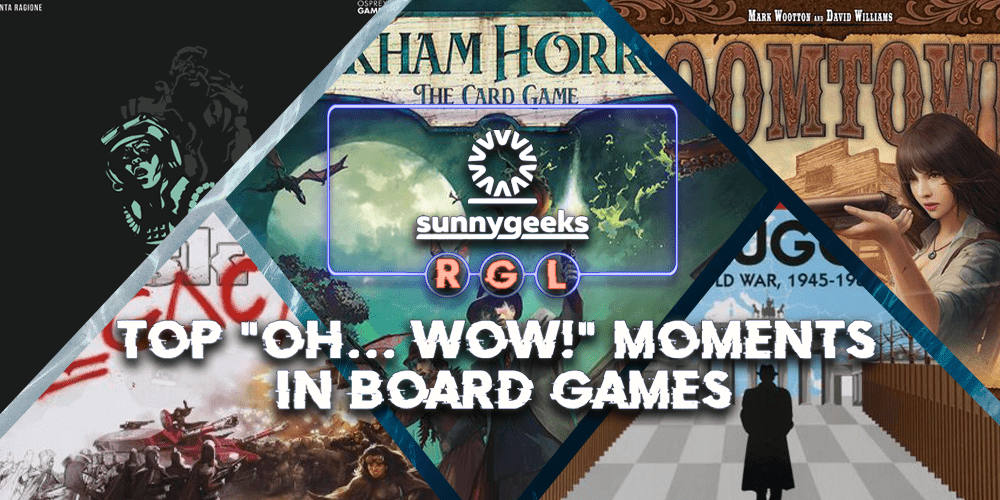 Sometimes games can be stunning.

Whether you’re discovering something new, unlocking a  unique play experience, or revisiting an old favourite – “wow” moments abound. But some are more memorable than others.

So, here are eight of our favourite times a game revealed its true beauty. Starting with-

There’s a lot in this

Tiny bag. Big game. First released in 2012, Love Letter is a classic for a very good reason. A game of elegant deduction, players take on the role of suitors trying to get a letter past a chain of courtiers to a princess. In practical gameplay, it’s a pitch-perfect game of deduction and bluffing as your group figures out the cards in each other’s hands – eliminating players if they are able to guess correctly. Made up from a tiny handful of cards, one round the table with this game has players gawping at just how much gameplay is in this simple pick – letting people get up to speed fast and enjoy the meta. And with so many options available, you can break it out on any table and watch the jaws drop.

So, THAT’S how farmers work!

The gateway game to end all gateway games. Carcassonne is a game of tile-laying and points collection as you build the roads and structures of your medieval cities. Teachable in minutes and simple to play (“Pick up a tile, place a tile, place a worker, acquire points”), the addition of farmers changes the game completely. Often introduced after a group completes their first game, placing a meeple as a farmer suddenly unlocks the full tactical potential of the game. Do you commit early and get more points? Can you force other players out of a good deal by joining your land? For many, this can be the first introduction to ‘heavier’ mechanics of gaming. And the minute the functionality ‘clicks’, the gate into the hobby is open.

The first of it’s name, Dominion is still a heavily supported classic with a wealth of expansions. And it’s popular for a reason. An ‘engine builder’ players use cards in their hand to complete actions with the goal of obtaining victory points. But doing this involves bending the game’s rules to breaking points. Cards can be trashed from your hand, re-used for extra points, give extra actions, or even turns if you plan correctly. While this can be a bit demoralising if you’re sitting opposite a player spewing out points while you’re trying to hoover up the occasional silver – few sights, or experiences, are as fun or impressive.

That’s not good at all

A lesser known classic from Alderac, Doomtown offers Weird West action in a box. Make your way past the initially byzantine rules and you end up with a game that is truly, truly special. Players take on the role of duelling gangs in a ghost town, aiming to acquire property, deeds, and build the gang of your dreams. And the apex – calling someone out. Mimicking the high noon of your favourite western, players take to the centre of the board and draw pistols at noon. But the results can be…problematic. New players can find themselves gunned down easily, ending a game in minutes. Or bogged down in a gunfight. Or taking advantage of the game’s poker-hand mechanics for each card played. But no matter the result, you’ll be left with an impactful battle that will leave an imprint in your memory for every session to come – perfectly matching the tension of a spaghetti western gunfight.

Is that a sticker!?

We’ve all heard tales of the Legacy format, but nothing prepared us for this. After winning a battle, a player consulted the manual, reached into the box, and…placed a sticker on the board? And wrote on it?! Introducing the system for audiences new, Risk Legacy was praised at the time for its innovative design and approach to consequential play. Without spoiling anything, after a few games your map will be close to unrecognisable – with doodles, stickers, and components scattered all over it. A wonderful introduction to the system, each game becomes an event. And as you slowly reach the end of your 15 game campaign…you’ll begin to realise exactly what you were steadily building toward.

Making a game from a deck of cards may seem boring, but when implemented correctly; it’s the most exciting thing out there. Launched in 2016, the game has moved from strength to strength and is currently on its seventh season cycle, offering adventure with every pack. And for all the table. As each game is physically sealed before play, your group will have zero clue about what to expect each time you sit down. This can offer unique settings, mechanics, play experiences, and persistent threats based on previous decisions. And when a previous choice comes back to bite you in the ass or the final ‘act’ deck card flips revealing an unforeseen threat…it’s dark magic indeed.

Wait…if you’re an alien, and I’m an alien

Sometimes, mistakes make a game truly special indeed. Set in the dark depths of space, play involves hidden movement as your group attempts to stealthily make their way to emergency shuttles…while something stalks. Disguised as crew, other players are ravenous aliens who follow the sound of your footsteps – concealing their presence until they are ready to strike. And sometimes, they get the wrong target. Players can be so good at pretending to be aliens, they eat their allies – snaffling down another alien by accident and reducing the table to tears of laughter. A powerful learning experience for your group’s meta and a moment you will never, ever forget.

Sometimes, players take things too far. Sessions can be filled with backstabbing, blocking plays, or seeking revenge from a slight ten sessions ago. But we’re pretty sure that reducing the world to ashes tops the list. A stunningly balanced game from GMT, Twilight simulates the balance of intrigue that characterised the forty-five years of the Cold War. Bluffs and feints abound, with both sides seeking to accrue influence and capital while nudging the needle on the doomsday clock. This dance continues for so long that the balance is taken for granted until…boom. One side tips the balance and all-out-war kicks off, nuking the globe and ending the game. A genuinely sobering moment for players…it isn’t long before you reshuffle and you’re back to scrapping over Cuba and china all over again.

What are your most memorable “oh wow!” moments in board games? Tell us in the comments!