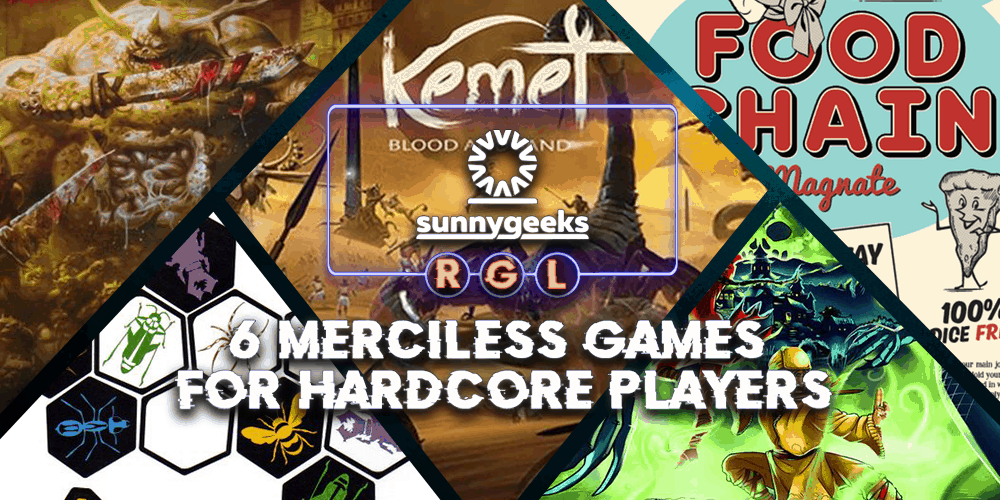 For some, the best gaming experiences revolve around destroying your opponent or getting stuck into a mighty battle – where the victor is determined by skill alone. Or, as in the case of one game on our list, the person atop a colossal scorpion.

So, here are six of our favourite games that are perfect for experienced players looking to kick some heads in. Starting with-

Most ‘dudes on a map’ games are all about posturing. You build your armies, shift them about, apply the threat of violence. Within five minutes of starting a game of Kemet, there’s a good chance a player will have warped across the table and done the Cosmic Egyptian equivalent of hitting someone with a collapsible chair. Encouraging conflict from the off, Kemet is perfect for groups that understand the minutiae of wargaming inside out and relish a fight or two. Throughout the course of the game, your army will hoover up powers and capture essential powerups and miniatures (see our reference to the aforementioned scorpion) to turn the tide of battle. With no random chance, victory goes to the greatest tactician, boldest warrior, and whoever ends up atop an arachnid.

Honestly, we’d like to throw Chess in here but I don’t think any of us have the mental energy at the moment. Instead, we wholeheartedly recommend Hive as chess in a pouch (or drawstring bag, if you picked up an earlier copy). A pocket-sized delight that plays in a fraction of the time of its mother and proves to be nothing less than an absolute battle of wits between two opponents. Demanding precision, care, and careful foreplanning from players – the greatest tactician will win out as players struggle to encircle their opponent’s queen bee. Throw in quick-to-learn rules, a range of expansion pieces to tailor your game, and simply gorgeous Bakelite pieces – it’s the definition of a game you throw in your bag, forget about, then crush your enemy and be done in time to finish lunch.

What game combines asymmetrical combat, Gods going to war against each other, multiple paths to victory, and the ability to play as an evil bird that knows everyone’s your secrets? Created by Eric Lang in the before-times of 2009, Chaos is a hugely popular area control and strategic combat game where players take on the roles of Games Workshop’s Ruinous Powers. With multiple win conditions and unique goals for each faction, play quickly degenerates into feints, gambits, ploys, and the Khorne player wading across the map challenging everyone to combat. A true delight for groups that love to butt heads, you can even expand your player count with the Horned Rat expansion to flood the board with rats and offer each God new, horrendous, options to make war on their enemies.

From the horrors or the warp to the terrors of fast food, Magnate is an exceptionally complex but satisfying game from the team at Splotter games. A Heavy (with a capital H) game of drafting and route building, Food Chain tasks you with assembling a fast food chain to stand the test to time. The only problem, there are others muscling in on your territory. This means taking your rivals on in the buying, marketing, and sales for each of your products while managing your human resources to get the most out of your employees before kicking them to curve. While it is quick to learn, failing to know the ropes will result in punishing defeat after defeat – with your business failing to market, your team falling apart around you, or just failing to maximise your margins. A joy for the right group (and with the right size of table) the game is a hard-edged delight that’s ideal for players looking for a challenge that has to be experienced to be believed.

Sometimes you just want to gather all your friends for an evening so you can be ground into the dust together. An absolute masterwork from the mind of Antoine Bauza, Ghost Stories lets players take on the role of warrior monks battling to protect a defenceless village from wave after wave of supernatural attackers. And, once you’ve got the rules down and a few sessions in, maybe – just maybe – you can declare yourselves victorious. Then you can realise that you were on the easiest possible setting. Coming with a range of difficulty options, the game becomes a brilliant diamond as you struggle with increased enemy numbers and combinations. Or you pick up the White Moon expansion that adds actual villagers to save. Or pick up Black Secret and have one of you take on the role of Wu-Feng and use your hard won knowledge against you. Truly the best (semi) co-operative game for hardcore groups on the market today. Only eclipsed by the next game on the list.

A bus. We’ve had Gods, demons, monsters, and the existential threat of capitalism. Yet, topping our list…a game about driving a bus? Now 20 years old and still being printed for a %$£ing reason, Bus puts you in charge of your own transport company and asks you to deliver as many people to spots on the board as possible. And that’s pretty much it. Except, someone’s buying more buses. So you buy more. And then someone else is marking out a new bus route, so you do then same. Then someone’s bidding on actions that you want so you buy it – except…you didn’t want to! Now you’re stuck with an action you didn’t want, a bunch of useless buses, and a map that resembles a bowl of spaghetti. And there’s no way out!! If only you had played more tactically, bluffed more efficiently, managed your passenger counts more effectively! And as Dave’s route collapses under itself, Jenny’s engine fails to start, and you struggle to do something anything of use this turn you understand the possibilities this game offers. And that’s Bus. Buy it.

Do you have any game to recommend, that hardcore players love?! Share it in the comments below 🙂

First two I was thinking of were FCM and Bus. I would also add Through the Ages – any game where you can get yourself into such a situation that the rules allow for you to take an action and withdraw from the game can be pretty brutal with the right group.

My wife and I love Hive and learning new strategies together has been constantly exciting as we continuously fine new ways to use all the pieces the other hasn’t expected yet.

Played Kemet a few months ago, it was a blast how you could mess with people in so many ways.

Kemet is a blast!