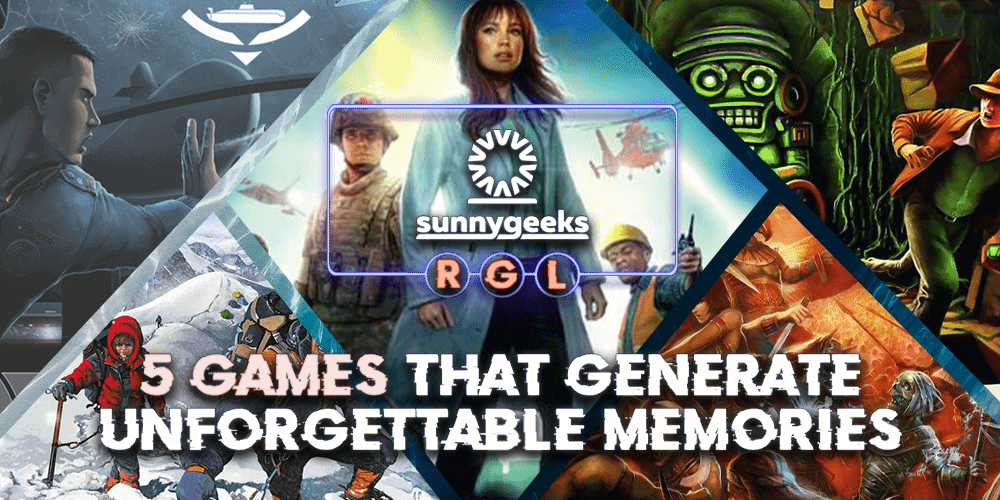 Ask yourself – what moments do you remember most in your lifetime of playing games?

Was it those exceptional plays that won you the session? Maybe the lucky breaks that allowed you to capture the points you needed to eke out a win? Perhaps exceptional moments of teamwork that let you prise a victory from the jaws of defeat?

Or maybe it’s when the wheels came off and the table descended into howling anarchy.

Here are eight of our favourite games that generate these amazing memories with every game and are damn fun to boot. Starting with-

“UNLOCK ME, PHILIP!!”: Offering bedlam in a box, there are few games that cultivate a sense of mayhem like Escape. Putting you in the boots of treasure seekers, players are given ten minutes to race through a crumbling temple and hoover up the gems they need to get out of the exit. This results in a game where players have to think quick and act even faster, with every wasted second bringing your group closer and closer to failure.

With movement governed by dice, player take actions simultaneously as they scurry from room-to-room as the timer ticks down. Except, out of all those faces of your dice, one of them is not good at all.  Rolling a black idol head ‘locks’ your dice, preventing a player from using it until it is ‘unlocked’ by rolling a gold idol head, which you do but roll another black idol. And another, and another, and another.

“Dive, dive, DIVE!!”: While Escape may offer weapons grade nonsense, the exceptional Captain Sonar really shows you how it’s done. Playing up to eight, each team of four takes on key roles in your submarine as you try and locate your opponents and reduce them to shrapnel – turning your gaming table into a tense bridge. Led by the Captain, each player takes on a vital role. The Chief mate co-ordinates orders, the Radio Operator listens to your enemy’s orders and plots their course, and the Engineer…well, the Engineer delivers bad news.

With each movement or action, part of your vessel ‘breaks’ and needs to be repaired – something that always seems to happen when you’re moments away from killing your enemy. The solution – surfacing. All damage is wiped away and you are a sitting duck as you tell the enemy exactly where you are. Cue your team completing a mini-game in tandem as you scream an order to dive before you are reduced to fish food. Fun for all the family.

“Wait…we have to come back down?!”: Designed by a trained mountaineer, K2 does a phenomenal job of replicating the planning and strategy that goes along with racing to the peak of the infamous mountain. Players are tasked with managing their oxygen, supplies, and balancing their acclimatization as the speed on their way. But Adam Kałuża’s greatest achievement is replicating one of the most dangerous of habits for climbers – myopia.

Professional climbers can become obsessed with their goal of scaling the slopes, often taking increasing risks to get where they need to be and failing to keep enough in reserve to get themselves back down again. Even experienced K2 players are familiar with the dawning realisation that they’ve burned through their supplies and cards getting to the peak…leaving little hope of returning home alive. And while this dawning realization can be hilarious for their competitors, the real-life parallels can be surprisingly sobering.

“He can do what now?”: Prayer. It’s a powerful thing and a solace for many. Especially when it allows you to summon a giant beetle that lets you zoom across the board and stab someone in the head. A masterpiece of design, Kemet places you in charge of rival Egyptian armies fighting over one of the Nile’s most famous exports…points. These are acquired through a number of routes including controlling one of the map’s many temples. And with temples come ‘prayer points’. And with prayer points comes access to the games staggering list of power tiles, with each giving players a list of bonuses. These include relatively mundane abilities such as increasing your ability to  recruit more units and bolster your defences to the ability to bring some truly insane units on the board.

These range from the relatively tame ‘ancestral elephant’ to the horrifying ‘Devourer’ that runs around the battlefield gobbling up enemies and excreting them as victory points. Before long, each side will have a unique alchemy of powers, units, and advantages that run the risk of fundamentally breaking the game. But if any of you can potentially recruit a phoenix, spring lethal traps, or increase your prayer points for every enemy you kill, everything must be balanced…mustn’t it?

“Oh…‘Epidemic’. What does this do?” : If you are even slightly into board game, you’ll have played Pandemic. One of the most iconic games in the hobby, the game’s simple ruleset slots together like an elegantly designed jigsaw. Hands are managed, turns planned, and diseases mopped up. And before long you’re left wondering why people find the game so difficult in the first place.

Then a ^&%$ing epidemic happens.

Shuffled into the game’s infection deck at the start of the game, epidemic cards increase the game’s infection marker and spews disease cubes across the board. In a best-case situation, this results in some minor changes to your plans and requires a little pre-planning before your next turn. However, if you haven’t been diligent in clearing out your cities, the disease cubes can result in an outbreak – sending them sprawling out across the map to screams of frustration. This rachets up your outbreak meter, places you in what seems like an impossible situation and results in your group dissolving into screams of frustration. Or laughter if you’ve been playing with the bioterrorist expansion.

What is your favourite board game night moment?! Share it in the comments below 🙂

Escape from the Curse of the Temple has memorable moments with every game! Great list of games

Pandemic is fantastic, but Pandemic Legacy is maybe my favorite game (board or video) that I’ve ever played. Just about 3/4 of the way through and every month has added new mechanics and complications.