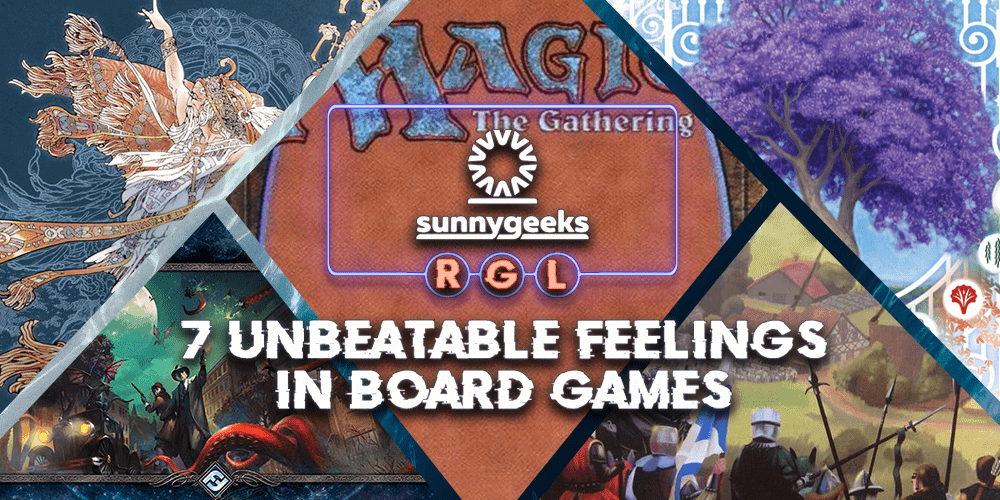 7 Unbeatable Feelings in Board Games

We’ve all been there. After hours of waiting, the stars have aligned, and you are ready to make the perfect play that will go down in history. Or maybe your opponent just made a massive mistake and you’re right there to make the most of it.

The best games in the hobby provide these feel-good hits during every session. So, if you’re looking for the next big hit for your games group or to play among your friends, here are some of our favourite options that bring the dopamine.

Building a car and playing Dominion have a lot in common. Both require you to carefully understand what’s being asked of you, require an analytical mind, and reward optimisation obsessives. And when the engine purrs to life, oh boy – there’s nothing like it. The prototypical deckbuilder, Dominion’s core aim is to cultivate a collection of cards that not only operates with efficiency but is game-breakingly great. Once you’ve optimised your build, junked your old cards, and picked up the last piece of your puzzle, you quickly become unstoppable. End game Dominion is a battle of wills as you scoop up victory points, slim your decks, or take advantage of bonus actions to bury your opponent.

A glorious bluffing masterpiece, Cockroach’s budget price and easy teach make it a valuable addition to any collection. But the best part of it doesn’t come into play until your group is sat around the table. Each turn, a dealer passes a face-down card to their target and tells them what it is, leading the target to take on of three actions. One, they can say they believe the dealer – if they’re right, the card bounces back. Two, they can call the dealer out – landing them with the car if they’re wrong. Or…they can look at the card and pass it someone else, leading to cycle to repeat again. This can lead to a moment where the entire table knows what’s on the card except for the final victim; leading the weight of the entire round to rest on their shoulders before bursting out in insane laughter. And it’s a moment that has to be experienced to be believed.

Beloved since its launch in 2016, Inis is a standout that offers dudes-on-a-map action that balances on a knife-edge. Play is dictated by a set number individual cards that allows individuals to attack, defend, add new elements to the map, and a wealth of other options. However, players can opt to pick up one of the game’s “God Deck” of cards that break the rules in incredibly specific and confusing ways. Activating these powers requires players to go out of their way to achieve specific conditions that look like blunders to new players, and strike terror into the hearts of the initiated. Laying down just the card you need to secure victory is as satisfying as seeing the disappointment and resignation in your opponents. Well, almost.

Let’s be honest, killing unspeakable terrors is very much a group effort. A co-operative masterpiece from Fantasy Flight, Arkham sees players build their own investigator builds to take the fight (or run away) from Lovecraft’s mythos beasts. Each turn sees players confronted by a range of horrors from traps, monsters, spells and worse. And, once laid out, players huddle and ask “well…how the hell are we going to do this”. Putting together a master plan with your scant resources and escaping by the skin of your teeth is an incredibly powerful experience. And one you do each turn, again, and again, and again…and it never loses its excitement.

When it comes to official licenses, they really don’t get any better than this.  Marrying an exceptional hidden movement game and a card-based battler, the game puts a team of shark hunters against the fearsome fish itself. Despite a relatively short playing time, the game clips along at a terrifying pace as the human team finds itself outpaced by the beast at every turn before finally taking it on mano-a-pescado in the thrilling conclusion. One that sees the boards eaten away from under you, resources dwindle, and hope fade just as you land the final killing blow that does away with the beast for good…or enjoy the thrill of devouring your enemies and speeding off to, presumably, eat some more.

A perennial (sorry) favourite, it is slightly tragic that the element that makes the game truly special is the same mechanic that causes so many people to turn away from this card classic.  The game is a relatively simple set-collection game that asks players to create pathways from the different colours of trees in your hands, letting you score multipliers and bonuses as you count the final scores…except there’s a final wrinkle lying in wait.  Points are only awarded to the player with the highest face value of the chosen of tree in their hand. So, even if you failed to put down any oaks or jacarandas during your turn, if you’ve got a few hole cards – they’re yours.

And our favourite feeling of all simply has no comparison. A common term in the world of magic ‘top decking’ refers to the act of grabbing the card you need from your draw pile exactly when you need it the most. This can be anything from the land you need to kick your engine into gear, a synergistic creature to bolster your defenses, or whatever weird artefact you’ve chosen to build your deck around. While it may not happen often (unless you’re playing…blue) getting that natural pull hits just right.

Which is your favourite feeling during board game nights?! Tell us in the comments below 🙂