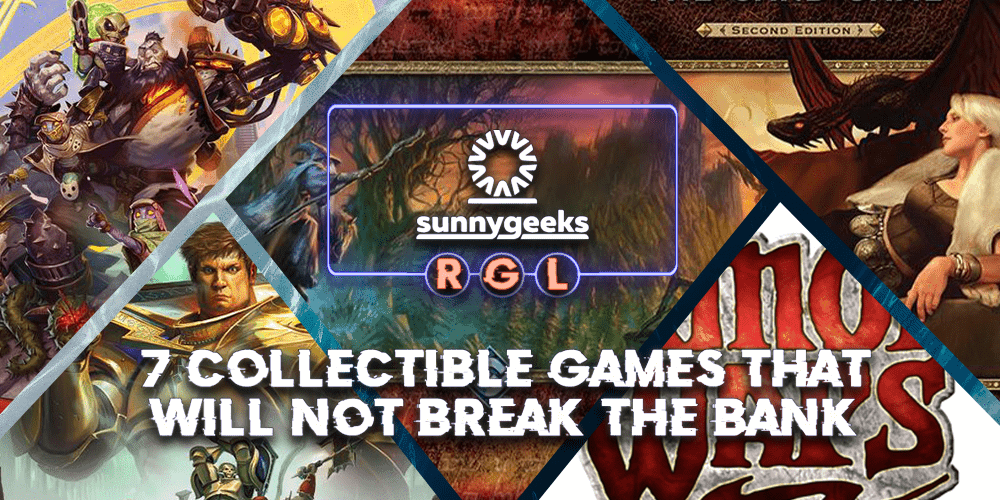 Whether you’re looking for an affordable adventure, something that’s portable and compromise free, or just taking on your friends – card games can be a fantastic way to scratch your gaming itch.

But while cards may not be costly to produce, keeping up with the meta can be pretty expensive. This can make even the most eager player reluctant to try something new.

So, here are some of our favorite CCG’s that won’t cripple you financially.

An ancient IP with a much loved history, this weird west icon knocked the socks off reviewers when it first released in 2014. Replicating the push-and-pull of the greatest western epics (with a smattering of Gothic horror), the game merges gambling, duelling card play, and area control mechanics to produce something that is much greater than the sum of its parts. While beloved upon release, the high initial skill ceiling played a big part in preventing the game from hitting the big time. Still readily available through a number of providers, the game’s base set provides enough cards to rumble with four players or build a detailed custom deck with two. And with regular updates provided by ‘saddlebag’ expansions, the game is perfect for those that enjoy skill-based games that won’t break the bank.

One of the greatest pleasures of being a nerd is when two of your interests combine in a way that is just perfect. Letting you play as one of the book series’ great houses, players need to combine their martial prowess, political influence, and guile to tackle their opponents. With incredibly thematic character cards and scope for memorable plays, the game is quick to learn and enjoys a colourful multiplayer component thanks to ‘tourney’ mode. Distributed under Fantasy Flight’s Living Card Game Format, players can grab a starter set and pick up any of the regularly released blister packs to match their meta. And, if money’s tight, ‘introductory’ packs can get you playing fast and copies of the first edition are still easy to come by – making it a perfect pick for budget gamers everywhere.

Ok – this one is presented with a few caveats. Designed by the highly experienced Richard Garfield, Keyforge was built from the ground up to revolutionise collectible card gaming. And it succeeded. Well, kind of. The game’s key draw was that every pack bought was unique and contained a combination of cards and potential synergies that couldn’t be found anywhere else. This meant that players could quickly and easily start playing without worrying about building their deck or an overall meta. Except…there was no guarantee that your deck would actually be any good. With a budget price for each deck and starter set, the game remains affordable so long as you don’t go overboard and start hoarding decks after receiving a pasting from one of your friends. If you can stick to your budget, this is a great shout for veterans and neophytes alike.

Sometimes card-games don’t have to involve you tearing each other’s throats out. Who knew? The immensely precursor to Fantasy Flights’ Arkham Horror series, LOTR allows you to build your own fellowship and take part on a quest to destroy the one ring once and for all. Requiring careful play and long-term planning – the game’s Saga expansions allow your group to trot to Mount Doom. While the Living Card format can potentially be expensive, putting together your own fellowship can help you carry the load (sorry) and fully customise your characters as needed. The game also provides an exceptional solitaire experience, letting you sharpen your skills before the next session and fully road test your Aragon before you start cleaving heads.

Now we’re really talking. One of Plaid Hat’s most iconic series, Summoner Wars was a colossal hit when it was first launched in 2011. Designed to offer tactical, engaging, and affordable fantasy combat – asking players to carve through the opposition to eliminate their enemy’s summoner while assembling an army to protect their own. Fast playing and easy to learn, the game enjoyed a slew of expansions and support until it finally went out of print toward the end of the decade. If you’re still keen to play, you may quickly find yourself facing an uphill battle as the Master Sets are hard to come by and can potentially sell above retail value. However, these can absolutely be worth it thanks to the inclusion of six complete armies that all play uniquely and offer a unique challenge to even the most experienced of gamers. With the new version just released a browser-based app, now is the best time to get Summoning!

“But it has miniatures” you say “and dice, and markers, and tokens”. “Yes” we reply, “and a big ^£&%ing stack of cards too!!”. A card battler disguised as a miniatures game; Underworlds arguably offers the best value-for-money for players looking to cleave their friends’ heads off their shoulders. Combining area control and dice-based combat, each game is played out over a total of twelve activations per side – with each decision proving to be vital. This allows you to augment your team’s actions with unique cards, letting you run clever plays, strike down opponents with magic, or a million-and-one other options. For those looking to start, the game’s new Direchasm season is set to release at Christmas, potentially making it the perfect present for quarantining groups throughout the country. Well, alongside an upgraded gaming table of course ????.

Magic has stuck around since the 90’s for a number of very good reasons, chief among them is variety. While you can sink heaps of cash into buying new sets, chasing legal cards, and optimising your deck, you’d be missing out on one of the most fun picks the game has to offer. Playing sealed is recognised as one of the most fun ways to pick up the game, but there’s no need to grab new packs for each session. Going to eBay or second-hand resellers can let you pick up a hundred cards for the cost of a pint of beer. These can be bundled into storage boxes and picked over for your session. Throw in a short timer and your group can make your money go further, enjoy the thrill of deckbuilding, and pool cash for your next session. And, if you’re still struggling, playing Pauper format can also help your money go further and picking up the recently released Magic: The Gathering Arena can ensure you stay sharp during quarantine and destroy your friends online.

Which is your favourite collectible game?! Tell us in the comments below 🙂