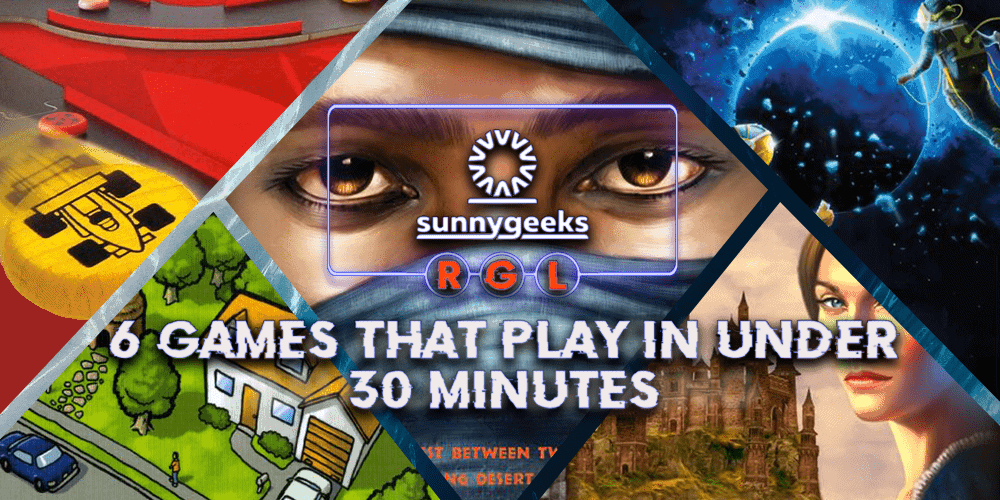 6 Games that play in under 30 minutes (we promise)

Time – like the entirety of your 100+ game collection – is precious.

No matter whether you have a gap over lunch, are waiting for a takeaway to arrive, or whiling away a lazy Sunday, having something great that plays fast is a massive bonus.
0
Do you agree that Fast filler games are vital for our hobby?x
Being able to pull a solid pick from your shelves can leave your friends hungry for more, let you get more games in during the week, and even help fight off the curse of…(shudder) Monopoly.

So, here are some of our favorite games that play fast and leave room for dessert. Starting with

If you’re looking for all the tactical decisions, economic development, and agonizing analysis paralysis of a full-fat experience crammed into a tight window…have we got a game for you. Beloved as a word-of-mouth classic, Targi is an exacting worker placement masterpiece that asks players to acquire the resources they need to trample their opponent by the end of the game’s tight running time. Play involves clever blocking, adapting your strategy to maximize your bonuses and planning to survive the knocks that your opponent will throw at you. While sessions may run long for the first few games, the simple ruleset and elegant player aids keep things going until the rules click into place and the fun really begins.

Moving from tactical nous to outright mayhem, Bruno Faidutti’s glorious Mascarade was lost in the shuffle when it was released in 2013, ending up eclipsed by Coup and other deduction masterpieces. But where other games may ask players to impose order on the madness of a hidden role game, this game asks people to revel in the insanity. A race to acquire the most money, each turn players are allow allowed to either activate their character power that sits face down in front of them, swap (or pretend to swap) their card with another player, or actually look at who they are. This economy of action quickly results in players losing track of who they are, what they are capable of, and making outrageous bluffs that few are anxious to call. Playing quickly and always dissolving into tears of laughter before the end, there are few games that pack so much into so little time.

A beloved darling recently published by Kosmos; The Crew is a trick-taking game with a twist – namely that each game is different from the last! The game asks players to play a staggering 50 sessions that introduce new elements and replicate the crew’s journey through space and the challenges they encounter along the way. This makes quality communication essential as you all feel your way together toward completing your shared goals, with each session over in no more than twenty minutes. This makes it an exceptional choice for lunchtime sessions with work or as a family game at the end of the day. And while we’re not going to give away any of the ‘missions’ you’re sent on, trust us when we say your group is going to be pushed to its limits ????

“So, it’s just a game about voting?” No. It’s the best game about voting. Replicating the adventures of Arthur’s court, Avalon is an exceptional co-operative party game from Indie Boards and Cards that absolutely has to be played to be believed. Rattling along at breakneck pace, the group is asked to choose a fluctuating number of members they can ‘trust’ to carry out a vital vote. Because there’s always at least one secret traitor in the group ready to spoil the pot when it suits them best. Like the best of games, this does little more than create a framework to allow players to just go berserk with paranoia as they struggle to find who they can trust. And when they base game has worn out its welcome, adding the extra characters and roles provided in the box quickly facilitates bluffs, double bluffs, and counter bluffs that add spice to every session.

Known as the family auction game as a reason, For Sale is a beautifully designed game about outbidding your Dad for a house that neither of you truly want. Played across two rounds, players bid to grab high value properties then use their purchases to bid for checks that add to their cash total and…that’s it. Like Resistance, this is so simple it can be taught in five minutes – with the auction mechanic allowing players to quickly get onboard and muscle out the competition. And once players understand the rules, the game takes on a life of its own. Bids are fierce and fast, and – before you know it – your group are ready to go again. An exceptional choice for a quick play and a filler everyone – and we mean everyone – needs in their collection.

Ok – let’s not pretend that set-up is involved. Because if it isn’t PitchCar is one of the best quick-and-dirty games of all time. Combining Crokinole with a Scalextric track, players are asked to navigate their car around the stunning track using flicks alone, with dexterity proving to be the name of the game. With a wealth of expansions and setup options, your game can extend well beyond even the most generous gaming table with jumps, hairpin turns and more. Once you’ve gone round once, you’ll realise the importance that tactics play, letting you use bumpers to skid round the opposition, knock players off to gain a tactical advantage, and much more. And with the last player going first each time, the game quickly dissolves into a mess of laughs, and flicks, and elbows.

What is your favourite quick game?! Share it in the comments below 🙂

Amazing article and I agree.

Among my favorites are (and these are party games) joking hazard, trial by trolly, cards against humanity and a none party game Trogdor.

We love Trial by Trolley and cards against humanity (haven’t tried joking hazard yet), and Trodgor is on our Shelf of Shame, we should really try this one soon ﻿????﻿

If you mean that you won’t stop at 1 session, thus it might even take hours, yeah, that’s SO true ﻿????﻿ But a session is usually very short (for us at least).