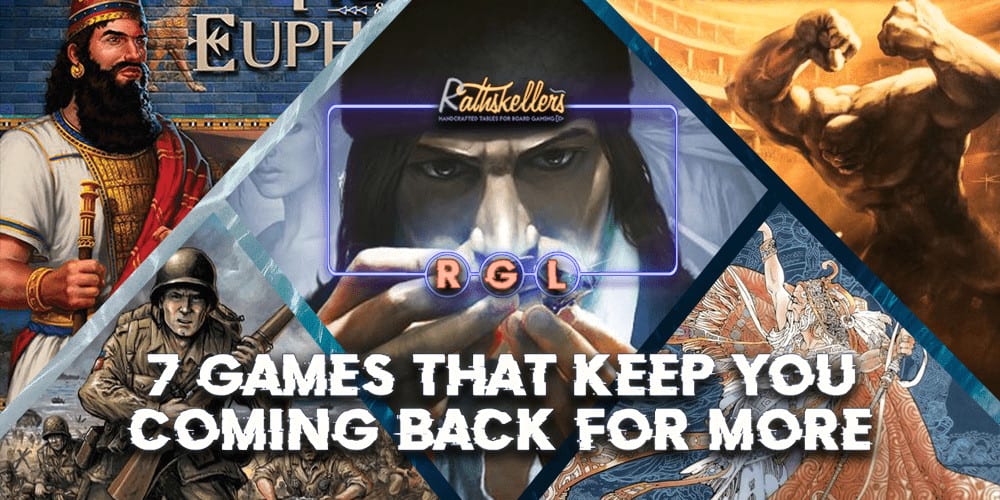 7 Games that Keep You Coming Back for More

Let’s be honest…how many games in your collection are gathering dust right now? Whether it’s depth, a satisfying loop, reduced downtime, or some special sauce that keeps you playing – here are some of our favourite games that are great for repeat play. No matter whether you like it or not ????

You’ve heard the positive press and picked it up, but…you’re unimpressed. A stripped back version of its mother, Duel pits two players against each other in a streamlined tug of war that is over as soon as it begins. And yet, you want to play again. Tight, taut, and surprisingly deep, Duel stands out for a reason as you assemble a civilization that can take your opponent down. Given the 30 minute playtime, every decision matters and plans shift and change as cards are denied and snaffled up. Before long, you’ll be hate-drafting, placing pressure on your opponent with your military might, or ferreting about for the scientific symbols you need to secure a win. Absolute genius and a quality pick for any couple. But if you’re looking to bring things a little more up to date-

Initially released to celebrate the memory and sacrifice of the initial D-Day landings, Memoir is a box as poignant as it is generous. Replicating the assault and travails with little more than plastic soldiers and cardboard hexes, Memoir replicates the desperate push-and-pull tactics of military combat while clinging to a wafer thin ruleset. Sessions rattle along quickly, leaving enough space for small rules changes that make every scenario feel unique. Add in a full, free branching campaign book and an embarrassment of expansions, and you have a game that stays fresh play after play that any member of the family can enjoy. Or you can just spring for the D-Day expansion, fill your gaming table and prove to six of your friends just how difficult coordinating a battle really is…

When people play Chess, they talk of the ‘feel’ of the game. While each game is unique, certain patterns emerge and reappear – letting players develop an instinctual as well as strategic awareness of what to play. No imagine a game that lets you hone that instinct and use it to summon a giant dragon to set and being of pure antimatter on fire. Developed by the legendary Vlaada Chvátil, Tash is a combination of abstract puzzler, arena combat, and area control that – despite being incredibly confusing – just clicks. Placing tokens on the board allows you to summon and activate creatures, letting you realise grand strategies, tactical calls, and marvel in how sneaky your opponent is. Find the right partner to pair with and you’ve got a beautifully balanced game that’s here to stay with every collection.

For those that don’t feel a session is complete until you’re ready to lunge across the table and throttle your opponent, there are few games better than Reiner Knizia’s exceptional Tigris. Combining exceptional depth with surprising simplicity, Tigris’ area control dominance asks players to find a balance between farming, trade, religion, and government as you press into your opponent’s territory. Even play on the larger map results in constant conflict as players are awarded based on their lowest points total – resulting in bluffs, strikes, and constant movement to secure the land you need to win. And even with a reasonably protracted ‘thinky’ playtime, it’ll not be long til you learn from your mistakes and challenge your opponent again.

While it’s fun to play involved, conflict heavy game – sometimes it’s just as fun to settle down with a classic. And Azul has established itself as one for a reason. A fundamentally solitaire experience, play involves unpacking a puzzle where you take and discard tiles to fill your player-board, with dropped items resulting in an increasingly crippling penalty. Oh, and when we said it was solitaire…we kind of lied. While there is zero direct player interaction, Azul quickly devolves into the most passive-aggressive game in experience as you nudge and cajole other players into making draws that back them into a corner until the both of you are neck and neck while, thematically, surrounded by shattered tile. And with light rules, an easy teach, and a short playtime; it’s only a matter of time until you break it out over a glass of wine and a cold winter’s night.

Described by the venerable SUSD as a puzzle that’s ‘rubberised’ Splendour is one of those games that appears simple but never quite makes its way off your shelf. Plopping you in the increasing comfortable slippers of gem merchants, the game asks players to build an engine to acquire more gems and valuable victory points before hoovering up game-winning patrons. This marriage of clear path to victory and a randomised setup makes it perfect for repeat play, challenging groups to find an optimal path to victory that – ideally – destroys the opportunities ahead of your opponents. Add in a genuinely game-changing, modular expansion and you’ve got a game that has the lustre to call players back time and time again.

There’s something to be said for a game that’s just beautiful. From the stunning Jim Fitzpatrick (of Che Guevara fame) box art, the original theme, to the elegant ruleset – Inis is a box that doesn’t convince you to pick it up again…you’ll come back under your own steam. Perfectly balance for two to four players, the game has players dancing around each other on a map to fulfil one of three key victory conditions. With play governed by a hand of cards, there are no random variables and multiple paths to victory. Are you going to try and outnumber your opponents in their own territory this time? Or maybe you can hunker down in temples while everyone else is scrapping over land? Or perhaps you’ll just spread out and occupy as much of the board as possible? Tactics and strategies change on the fly, the gods intervene to break the rules of the game in bizarrely specific ways, and you’re always one step from victory. And that desire to ‘go again’ to see what the hell you’re going to get up to this time is something very special indeed.

Which is your favourite game?! Tell us in the comments below 🙂