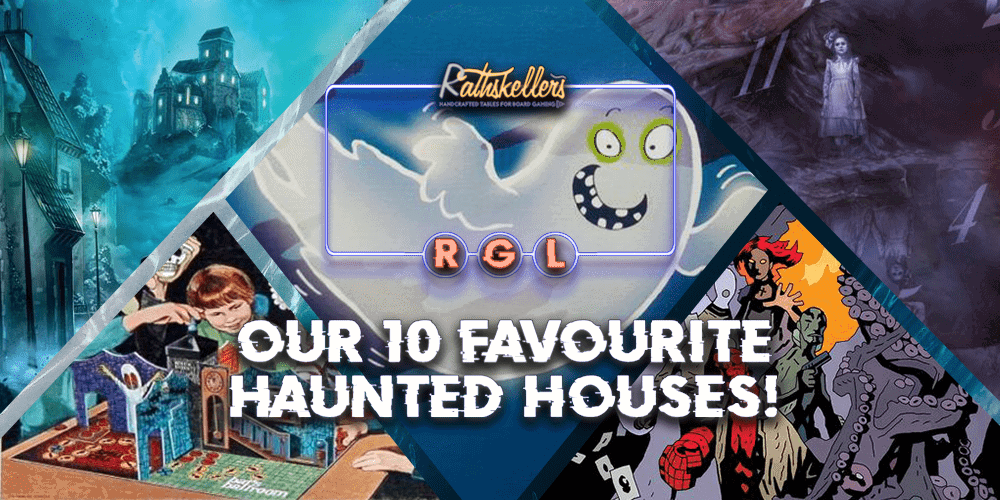 When it comes to horror tropes, there is nothing better than the thrill of a haunted house. No matter whether you grew up on a diet of scooby doo, enjoy a bit of classic terror, or just love to be scared – there’s few settings better than a haunted house.

So, here’s some of our favourite crack’d and crook’d manses in gaming. Starting with-

An absolute delight of a party game, Mysterium is arguably the most gorgeous and thematic game on our list. Letting you enjoy Dead-Man’s Dixit, the game puts you in the role of psychic investigators summoned to help a ghost solve their own murder. Tasked with solving riddles and clues, the game is covered in an absolutely gorgeous art design – creating a Disneyfied take on the haunted house that’s as creepy as it is stunning to look at.

Or ‘Cthulhu Yahtzee’, Elder Sign is living proof that throwing a Lovecraft wrapper over every genre is going to result in a success or two. Placing you in an uncanny museum as investigators, players are required to fight their way from room-to-room and avoid the fangs, claws, and tendrils of the beasts in their path. Culminating in a scrap with an ancient one, the game is a light-weight delight and also offers six expansions that genuinely elevate the game from its humble origins and let you scale the mounts of madness, scour Arkham for insight…or face the terrors of the deep.

While we’re normally reluctant to list a game that hasn’t been released yet, it’s close to impossible not to recommend the delightful art and aesthetics of Shivers. With art from Bill Tiller of Curse of Monkey Island and The Dig fame, the aesthetic is astounding and uses a combination of magnets and gorgeous pop-up art to map out fearsome encounters with spooky adversaries. A promising cross between an RPG and an escape room, the game is something special that should be looked at by any fan of gothic scares.

Your players creep down the mouldering castle steps, your candle illuminating the basement to reveal…a wooden book, mouse, and ghost that looks like a salt cellar. A multiple award-winning dexterity game, Blitz askes players to grab the ‘correct object’ from a pack of cards, with the fastest finger getting the point. Suitable for all ages, the gorgeous art and tactile pieces recall the safe spookiness of days gone by…and makes is a perfect opening game for a session. Or a rock-hard challenge after a couple of glasses of wine. But if you’re looking for real terror.

Expanding on ground trod by Consulting detective, Mythos Tales lets you take on the unfortunate role of a Lovecraftian protagonist jamming their nose where it doesn’t below. Playable with groups of any size but singing with two, the game lets to stalk through the storied streets and homes of Arkham and piecing together clues that let them solve the case and become irretrievably insane. However, it is important to make sure that you pick up the latest print run of the game as older copies have infamously fickle errata and even plot holes. Are the elder gods to blame? You didn’t hear it from us.

Sometimes, it’s the games you least suspect that turn out to be great. A solid all-ages treat, this roll-and-move game lets players take on the role of diminutive ghost-hunters and fight ghoulies for their treasure. Co-operative and easy to learn, the game comes with surprising depth and a gorgeous board with glow in the dark pieces – making the abstract world of board gaming easy to grasp for even the youngest of players.

There are two types of haunted house fans. Those that love a confined rollercoaster that scares the pants off you. The other wants to put a frog monster through a &^%ing wall. Based off the cerebral artistry of Mike Mignola, the game is an exception, expandable dungeon crawler that puts you in the heart of a number of haunted houses and asks you to punch you way through hoards of ghosts, goblins, in beautifully realised tiles and stunning expansions. While these can take up a little room, picking out the right table can help ensure that Anung Un Rama has the space he needs to clatter Baba Yaga into the next dark age.

For gamers of a certain age, Haunted Castle was ‘THE’ game to have. Barely a game by modern standards, players were asked to roll a dice and move to escape the haunted castle where they found themselves trapped. The real joy was setting the (still) beautiful diorama up and fall afoul of one of the game’s many traps that could knock you back to the start. The birth of many player’s board gaming obsessions, this ahead of its time and – aside from being clunky and dry to play – still captures the childhood joy of getting together with friends and breaking a game out before the cartoons came on. But if you’re looking for something that truly lets you explore the depths of a spooky home-

The latest iteration of Fantasy Flight’s long-running franchise, Madness is an app-assisted co-op marvel that lets you and your friends explore the secrets in a range of grand (but terrifying) homes belonging to often former Arkhamites. And, more often than not, end up eaten by whatever lurks inside. Using a smart device to take some of the admin out of the series allows players to enjoy a streamline experience, randomise adventures, and take part in digital puzzles. All to a grisly, scene setting score that perfectly captures the mood.

If you’re looking for the real deal, you’ve found it. Building on the iconic legacy of the Betrayal series, this version from the mind of Rob Daviau lets players take on the role of members of a family dynasty in part of a thirteen game long story the weaves a tale about the history of your home…and the skeletons (literal and metaphorical) in your closets. Unique for every group, the game lets you realise those dreams of forging through a haunted house to fight the evil inside. Except…this time it’s one of you.

Which is your favorite Haunted House? Share it in the comments below 🙂