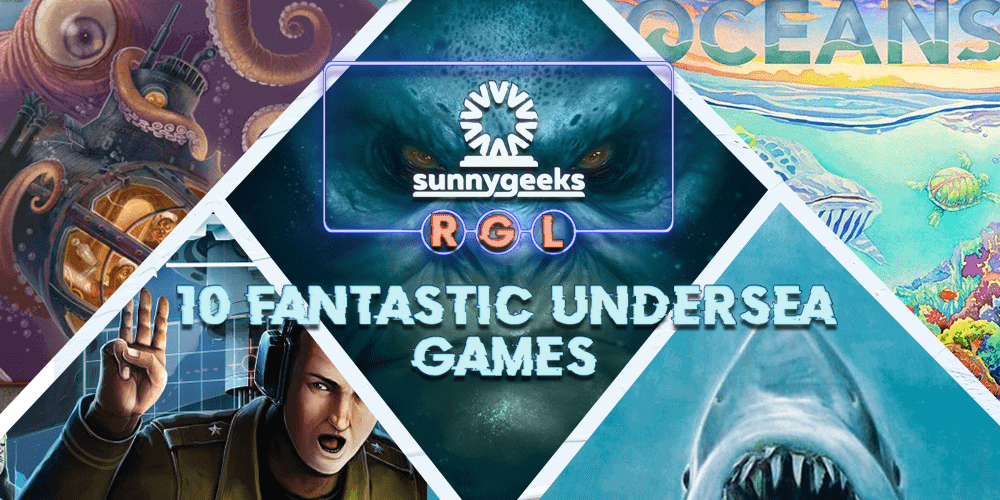 Whether you’re keen to explore the depths or get pulled into the murk by a squamous horror, boardgames have something for every fan of the ocean. But the best the industry has to offer can sometimes be difficult to get your hands on.

So, here are some of our favourite games that allow you to plumb the depths of what boardgames have to offer. Starting with-

Tabletop RPG’s allow you to go anywhere and do anything. So why not pop down to the shoreline and spear a selkie? Offering a range of environments and way to explore them, a request to your DM can quickly see you trekking through the foam of the Sword Coast, visiting the lost city of Aumrath, or just pay a visit to an island you could have sworn wasn’t there yesterday. And, while you’re down there, you can make a friend or two. You can trade blows with the (relatively) benign Kuo-toa, deadly Morkoth or fearsome Kraken. Lets just hope that water breathing ritual holds, eh?

Beloved by many, this comprehensive masterpiece sees players plunge to the bottom of the sea floor and found a civilization that proves it truly is better down where it’s wetter. Combining city building with hand management, Cities offers significant replayability and a long path to mastery – making it perfect for gamers looking for a Rapture of their own. This lets all stripes of players find their groove, from those looking to optimise their approach, build something new, or become the undersea property baron they’ve always dreamed about.

Diving – what’s not to love? The roll of the ocean, silence of the deep, crushing pressure of oxygen management and competing against rival divers. It’s all a delight. Playing as a band of wreck scavengers, players optimise their approach to grab hold of treasures and search the oceans for new sites to hit. And with the clock ticking down, are you willing to risk your team for the next best score or will you up anchor and move to the next hotspot and grab your deep-sea nest egg!

Following hot on the heels of the legendary Azul, Next Move’s 2018 puzzler was initially dismissed on release but has steadily gained a fanbase that adores this organisational masterpiece. Putting players ‘in charge’ of a coral reef, points are scored by growing your coral into new directions or scoring points, with certain patterns carrying hefty bonuses. Offering a steadily shifting possibility space and easy-to-learn rules, it’s easy to see why it deserves a place in every discerning family’s collection.

Gnomes running a soviet era submarine being attacked by an octopus. What could go wrong? Combining time, resource, and hand management – players take on the role of one or more of the sprites as they fight fire, flooding, and crippling pressure as they struggle to run out the clock. But as each new hazard appears, every attempt to resolve it creates more thematically appropriate disaster as your diminutive team of experts bring the sub down on their heads. Quick playing and hilarious, November is the perfect opener or closer and ideal for those who love crisis management without the blinding stress.

As if one game about oceanic colonization was enough! Released in 2014 and crafted by the infamous Stefan Feld, Aquasphere is a heavyweight management and exploration game about charting the depths of the sea and the accumulation of knowledge (re: points). Each turn sees your submerged scientists manage their time to improve their labs, move their ships, and scan the odd cephalopod or two. Though it can be a bit of a table hog, the design and layout make it perfect for all groups.

When something is described as “the most ambitious project North Star Games has ever tackled” you know it’s going to be something special. You just didn’t think it would have so many teeth. Marrying the mechanics of their classic Evolution series to the depths of the oceans, players work to build their complementary ecosystem. And, at the halfway point, evolve all sorts of unspoken terrors from the deep to destabilise everything. Educational and fun in equal measure, Oceans is perfect for fans of sea life and critters that look like they were designed by a losing player desperate for points.

Call us sentimental, but it’s always a pleasure to see a classic property receive an adaption that captures the spirit of the original and is still fun to play. Setting players up as the trio of shark hunters against the titular fish, play is fast and brutal – marrying tense hidden movement and strategic combat. The game also has just the right number of moving pieces to make it digestible to new players and a wealth of options when it comes to bluffing your opponents. And at a budget price point, there’s no better time to go swimming with or without bow legged women.

Imagine the cold and brilliant beauty of Splendor…now add merfolk and court intrigue and you’re looking at one of the most visually stunning games in recent memory. Designed to replicate the push and pull of aquatic politics, the game asks players to make cunning decisions to accumulate wealth, influence, and land to make their grab for the throne. Throw in the exceptional Leviathan expansion and you’ve got a game with enough complexity to make it a mainstay in almost every collection.

Ok. So, imagine Battleship. Except you’re in a submarine. And you’re working with two teams of four to kill each other. And everyone’s yelling at each other. A phenomenal party mainstay, Sonar is an exceptional game that’s as simple as it is intense, mimicking the push and pull of naval combat and the genuine frustration of your friend Jim not doing his job properly!! Played out over maps and rounds lasting anywhere from 10 minutes to seconds (“Surface?! NO!!), the game is as much an experience as it is a game. Play it at least once in your life, trust us. Just…brief Jim first. The guy’s a liability.

Which is your favorite Undersea game? Share it in the comments below 🙂