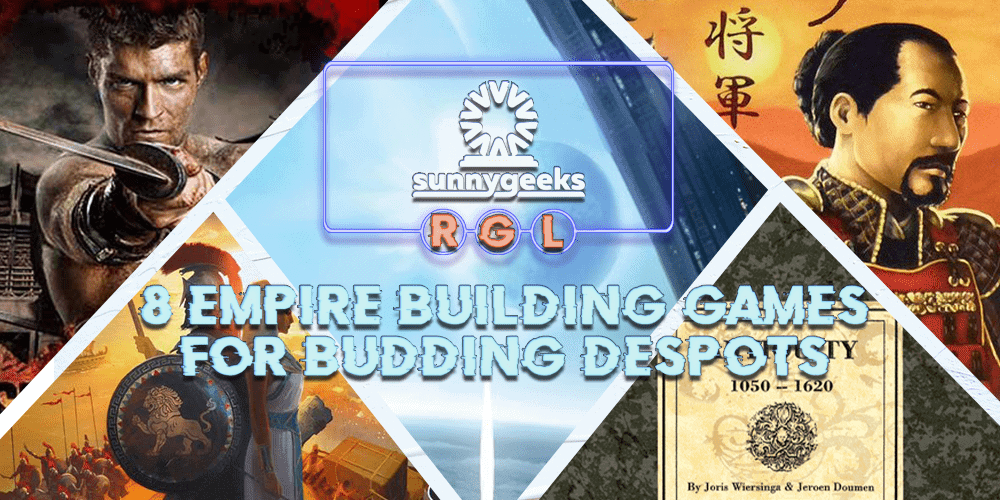 While here at Rathskellers we love games that reward peace and creativity… sometimes you just want to stomp some heads throughout the ages. Or in space, we’re not picky. Thankfully, the hobby has more than its share of games that let you build a mighty empire, steamroll opponents, and bring wreck and ruin to those who oppose you. All with within two to three hours at a time.

So, here’s a list of games that let player build something that’s theirs and tear down an opponent’s work with nary a thought. Starting with-

A veritable Varys simulator, Whispers is a streamlined masterpiece that mimics the push and pull of high intrigue and raw opportunism. Establishing your group as distinct schemers, play involves pledging loyalty to one of the five empires in a fantasy war – aiming to end the game with the side you are most loyal to claiming the throne. Allegiances shift, betrayals sprout, and trickery abounds. And with only four rounds, you and your fellow conspirators quickly finish out your game of thrones and move onto the next one.

Moving from fantasy to the streets of Sin City, players take on the role of an ‘enterprising’ entrepreneurs looking to make a killing in the Nevada desert. Built around a solid economic backbone, players combine gambling with spreading their influence as they aim to build their casinos across the strip – with light touch rules making plays devious and intuitive. One of the delights is the game explicitly allowing, if not actively encouraging, layers to engage in table talk. This includes threats and strategy all the way to making deals or payments, perfectly replicating the ‘anything goes’ hustle of the time. Muscle out your opposition, make off-the books trades, or try your luck in your rival’s houses to earn dough. Ruthless, relentless, and really, really great.

A permanent member of the BGG top 20 since its release, Duel lets you play as two rival civilizations duking it out over three ages in history…all within half an hour. Stripping the fat out of it’s namesake’s mechanics, game is lightning quick, with players drafting cards from a central pile. This makes every decision count and demands balance as you acquire resources, clash on the battlefield, and juggle several victory conditions. Perfectly replicating the struggle of ancient power, the Pantheon expansion brings the gods themselves into play – letting you shake the heavens…and your opponent’s confidence as you steadily inch that crimson conflict token toward their capital.

Struggling to find the time (or bodies) for a day-long session of Twilight Imperium? Fret no more. Putting you in charge of an interstellar civilization, Eclipse lets you 4X your way through out the universe as you map star systems, build new fearsome weapons, and carve your way through the opposition to secure victory. While the initial learning curve may be steep, pacey turns and a deceptively deep decision space makes it a highly replayable delight. The forthcoming second edition files off some of the rough edges of the original and helps to deepen and further refine play – making it the perfect pick for would-be conquerors everywhere.

Taking place during Japan’s Sengoku period, this game’s name and reputation rightly precedes it. Famed for its balance and tactical depth, the game lets you play as one of the period’s great Daimyos out to claim the title of Shogun. However, there’s more to this than meets the eye. The game demands players maintain a delicate balance between warfare and resource management, asking you to use your lands wisely as a tricksy bidding and auction mechanic to get your way. Add in the game’s infamously fickle cube tower and victory in combat is – at the very best – an unpredictable variable in your overall strategy. Perfectly capturing the wealth of considerations that come with feudal leadership, this is an exceptional and highly playable game that educates, entertains, and allows experienced warmasters to take you to *&^^ing school.

An absolute beast of a game, antiquity asks players to build an empire that survives – never mind prospers. Dealing with economic issues, starvation, pollution, disease, and an increasingly cramped board – players are scrabbling for momentum to the last minute of play. And with a trademark ‘Splotter’ approach to design, the risks of failure are real – often leaving you with few options if you find yourself trailing behind. Brutal, oppressive, and relatively conflict free; Antiquity is a fierce and true depiction of the terrors of civilization building and the challenges and cruelty our predecessors faced. But, if you’re looking for something a little more ‘fun’…

Emphasizing the ‘legacy’ element of empire, this exceptional creation from GaleForce9 captures the cut-and-thrust politicking that lies at the heart of running a Ludus. Perfectly matching the show’s themes of grasping power through betrayal, murder, and the accumulation of beefcakes – players vie to acquire influence that expands their clout and capacity for harm. However, opponents will quickly band together to pull them down again like crabs in a bucket. A tight, taut masterpiece that reduces players to laughs and groans as your favorite gladiator is unceremoniously executed and your enemies massively profit. And the series is freely available through streaming services if you want quarantine viewing that begins as a guilty pleasure and evolves into something truly special indeed.

Oh – so, you really want to build an empire, do you? Described as a ‘Royal Rumble in the Iron Age’, Advanced and Mega Civ require players to build an empire, people, and culture that endures. This requires balancing scientific achievement, religious doctrine, economic advancement and much more to help you gain the foothold that you need as the centuries batter you like surf. Popular in tournaments and played across days, the more manageable Advanced Civilization can be finished within a day – making it the ultimate test for a player who wants to put their drachma where their mouth is. And, if you’d like to complete something that doesn’t require you to take an entire day off work, the iconic Through the Ages can be a fantastic – if heavy – pick.

Do you have any empire-building games to recommend?! Share it in the comments below 🙂