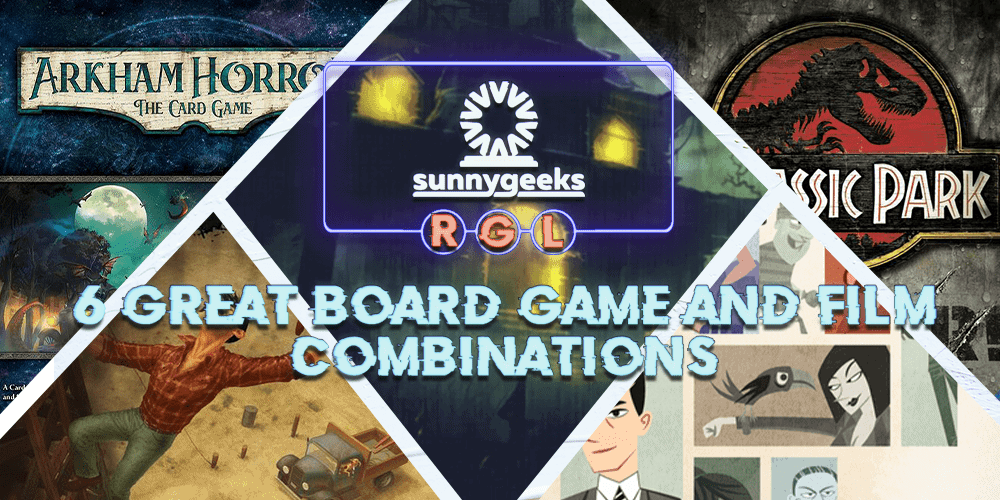 6 Great Board Game and Film Combinations

Sometimes it’s worth adding a little extra flavour to your gaming session. This can involve playing a spooky soundtrack, providing some extra props, or sitting down to enjoy a movie as part of your evening. Picking out a quality film can help you set the tone for a game, prime your players for high-octane fun, or just help relax your fried brains after a particularly gruelling battle.

So, here are six of our favourite games with a cinematic chaser. Starting with-

6. Betrayal House on the Hill – Cabin in the Woods

The perfect ‘beer and pretzels’ game, Betrayal tasks players with making your way through a haunted mansion to defeat the unknown evil within. However, this co-operative session soon turns on its head when you collect enough omen tokens – triggering ‘The Haunt’. This sees at least one player take on the role of an evil mastermind and launch into a scenario from literally dozens of genres. This includes zombie attacks, cultist attacks, and much more – letting all of you star in horror film without knowing the genre.

A fantastic dark comedy, Cabin in the Woods is an exceptional deconstruction of the horror genre and serves as a perfect complement to Betrayal’s smorgasbord of terror. Sporting one of the best opening jump-scares in cinematic history, this is a beautiful love-letter to contemporary horror that’s perfectly structured and terrific fun. And with Bradley Whitford, Richard Jenkins, and with a pre-Thor Hemsworth on board for the ride, there’s truly something for all fans of fear.

A slick delight, Colt Express is an affordable option that deserves a place in any collections. Putting your cowboy brigands on a train – your crew quickly fight among themselves to avoid the Marshall and score the most loot. Picking up the game’s expansions allows you to complete your western ‘heists’ checklist. Jump onto a horse? Yep. Ride a stagecoach? Definitely. Throw a bad guy from a train? It’s all there and immediately accessible, letting players of all ages take a turn at being bad.

Taking a uniquely American twist on time travel Back to the Future’s sugary depiction of post-foundation America is the perfect complement to a whip-smart game of Colt Express. Perfectly plotted, hilarious, and full of heart – the only problem would be temptation of watching the entire trilogy in one sitting. And, if you’re keen to really get in the mood, the game even includes a DeLorean (or ‘Time Travel Car’) as an extra with its own unique mechanics, letting you hop back in time to give yourself an edge over your opponents.

Tim Fowers’ inarguable masterpiece – Burgle Bros lets you engineer the caper to end all capers. The game sees players steadily climb a tower and avoid security, with stunning art design packing neatly into one of the most stunning game boxes we’ve ever seen. If you’re keen on a few extras, you can pick up a plastic frame that lets you assemble your unique floors in a single tower – adding nothing to gameplay but bringing a tactile joy that few games can hope to match.

If you’re looking for another story about a gang of idiots trying to commit a robbery, Logan Lucky is the flick for you. While the film focuses on a team of losers trying to rob a Nascar Track, a conventional story is told with unrelenting flair. The game and film both rachet up the tension while leaving room for comedy – providing belly laughs and edge of seat groans. And there will be at least one player doing the Adam Driver voice throughout your next session.

3. Arkham Horror: The Card Game – Color out of Space

A perfect combination for a night in, the Arkham Horror Card game is an truly exceptional campaign masterpiece. Letting you play as period investigators, players are forced to scour the insidious streets of Arkham while looking for clues, managing their decks, and undertaking careful planning in order to avoid having their heads pulled off. And with a wealth of extras still being released by Fantasy Flight, each session is a surprise. And a deeply delightful, unpleasant one.

Written and directed by the schlocky and beloved Richard Stanley – Colour is a faithful, modernised Lovecraft adaptation that places Nicolas Cage at the helm to chew the scenery. Sticking faithfully to the beats of the original story, it’s a low-budget thrill ride. And with an adaptation of the Dunwich Horror on the cards, there is no better time to take the game off your shelf.

2. Black Gold – There will be blood

Cutthroat, oil-spilling madness- Black Gold is lightweight economic marvel for those looking to get their teeth into something meaty within a short timeframe. Built around an exacting tug of war that sees you face off against your competitors, the game encourages buying low and selling high – letting you compete in brutal auctions and bluff to drive up the costs of shares. With the addition of a ‘Big Oil’ timer preventing the game from overstaying its welcome.

PT Anderson’s opus follows the life of Daniel Plainview in a study of America’s relationship with oil, wealth, consumption, and power. A tough watch, the dose of murder, mayhem, and dark humour make it a heavyweight delight to soak up with friends. With astonishing performances and iconic imagery, the table will be full of threats to drink other people’s milkshakes.

Hold onto your butts…

It would be an absolute crime if we didn’t end on this solid, thematic delight. Set on the doomed island, one player controls the dinosaurs skulking around the park and the other is in charge of the team of humans working together to switch the lights back on. The game strikes a perfect balance between threat (with light player elimination) and fun, with dinosaurs chowing down on humans like peanuts. This all takes place on a gorgeous modular map of Isla Nubar, ensuring that the game never plays the same way twice. Pacy, simple fun for family and friends.

Still a timeless classic, Jurassic Park is an absolute joy of a blockbuster to watch. The physical effects have not aged a day and the plot rattles along like a herd of gallimimuses. Whether you’re showing your kids for the first time or just here to enjoy Jeff Goldblum’s torso – the drum tight film demands a rewatch.

Do you have any game+film combination recommendations?! Share it in the comments below 🙂