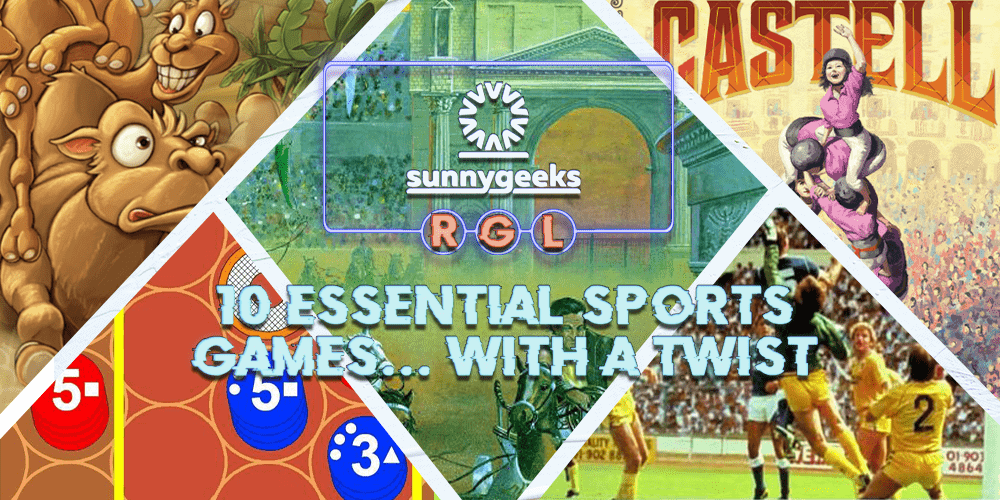 Generally, the worlds of professional sports and tabletop games don’t overlap. But when they do…something truly special can happen. Combining real-world tactics and the joy of gaming, some of the best competitive games you can pick up are inspired by the world of competition.

So, here are ten of our favourite games that put a twist on classic sports. Starting with-

Just when you though Icarus was the pinnace of modern cycling, this beauty comes along. Making the highly technical world of cycling accessible, Flamme tasks players with hand management to maintain placement control over their riders, ensuring that you are perfectly placed to push ahead, draft into a tactical spot, or deny your rivals victory. A game of endurance and long-term strategy gather some friends and hold your own tour de France today!

Described as ‘skirmish soccer’, Guild ball is fantasy football in its truest form. Built around two teams knocking the absolute hell out of each other, Guild is a surprisingly tactical game that requires application of real-life ball playing when it comes to formulating an adequate strategy to take on your nightmarish opponents. Of course point scoring is a little different from the beautiful game, with teams awarded points for scoring goals, taking out opponents and even totalling the other team’s mascots. And with a metagame tasking you with a balance of influence and momentum – it’s the perfect pick for would be coaches and fantasy fans everywhere.

Combining baseball, card drafting, and the lustre of the future – 2045 is a bizarrely accurate representation of running a baseball game where 9/10 players on the field are robots. Asking you to craft your own team, finding a balance between fielders, pitchers, and catchers is essential – cutting play down to the quick and providing the ‘highlights’ of games. Letting you play seasons in under an hour. This sees you make impulse plays to counter your opponent’s strategy, pad out your roster, and see if your team can come out on top at the end of the day.

While you may think you don’t have a copy, ask your Dad to get his one from the attic. Trust us. It’s there. A turn-based standard throughout the UK, the game puts players in control of a team of inch high players and tasks you with slotting your ball into the back of the net. Simulating the full gamut of official rules, this requires a high degree of skill and rewards skilful play – with trick shots, feints, and tactical plays winning out against predictable gambits. Just be sure to get the right sized table to host your colossal felt pitch. Cheap, cheerful, and a great chance for your parents to take you to the cleaners – Subbuteo is great for your next family gathering.

Based on the stunning Catalonian tradition of forming a human tower, this highly original game tasks you with recreating the spectacle. The game lets you play as a team of players moving from region to region and competing for the title of best castiellers in the land. Using the core principles of strength, balance, courage, and common sense – the game lets you train up your team members and compete with your opponents to construct the best tower possible through careful hand management, sly plays and savvy picks. A criminally overlooked classic, Castell is perfect for the Europhiles and quality lovers everywhere.

Ok, we’re reaching a bit with this one. But who among you couldn’t resist putting gladiatorial combat and chariot racing into the list? Set before the decline of Rome, the game of two halves asks to you to take part in a break-neck chariot race and brutal arena combat to claim victor. When it comes to swords and sandals, the game perfectly represents the thrill of feints and swordplay to deliver a killing blow. And when it comes to racing…all bets are off. Smashing, beating opponents, or deliberately scything fallen riders in half. It’s a true peach of a game.

Bringing the speed and simplicity of basketball to a table is a tough ask, but this stellar offering from Miguel Marques manages it with aplomb. Offering all the key variables in a game, players are tasked with opening opportunities, closing the deal, and having the flexibility to respond to threats. Fantastically portable, the game offers a wealth of options for play that match the intuitive delights of its namesake and genuinely deepens tactical appreciation. Abstract but dripping with theme, if you can pick up a copy from the publisher, it’s a tremendous add for the right evening.

An often-overlooked modern masterpiece, Klask combines pong, hockey, and table football to bring fun and a surprising amount of strategy and skill to your table. Played across a specially designed board, each player uses a powerful magnet to control their playing piece and knock a ball into their opponent’s goal. Play bounces back and forward as you make shots, avoid getting one of the three magnets littering the table stuck to your playing piece, or if you lose control of your player. Taught in seconds but enjoying a small footprint and high skill ceiling, Klask is the perfect pick for players fed up with table football.

American football with Orcs. If your ears don’t prick up at the idea, it may just be best to move on. First launched in 1986, this box of wonders has been a mainstay for games workshop – with official tournaments still played up to the latest version’s released in 2016. Highly tactical, players assemble their own team of nimble humans, deadly orcs, or the range of additional fantasy races that have been steadily added over the years. Great fun – if a little impenetrable to start – if you want to try before you buy, you can pick up a copy of the game online and stage your own socially distanced championship today.

The sport of Kings…ish! Camel Up is a tremendous, light touch racing game for players of all ages and confidence levels. Asking players to place a punt on Camels as they thread their way around a beautifully rendered cardboard pyramid, Camel is hilarious in the extreme. Offering just the right amount of player interaction and tactics to ensure that careful players stand a chance, it’s essential at your next gathering. And with a beloved expansion that ups the player count to ten players, there’s no better time to bring it to your table.

Which is your favorite Sports board game? Share it in the comments below 🙂