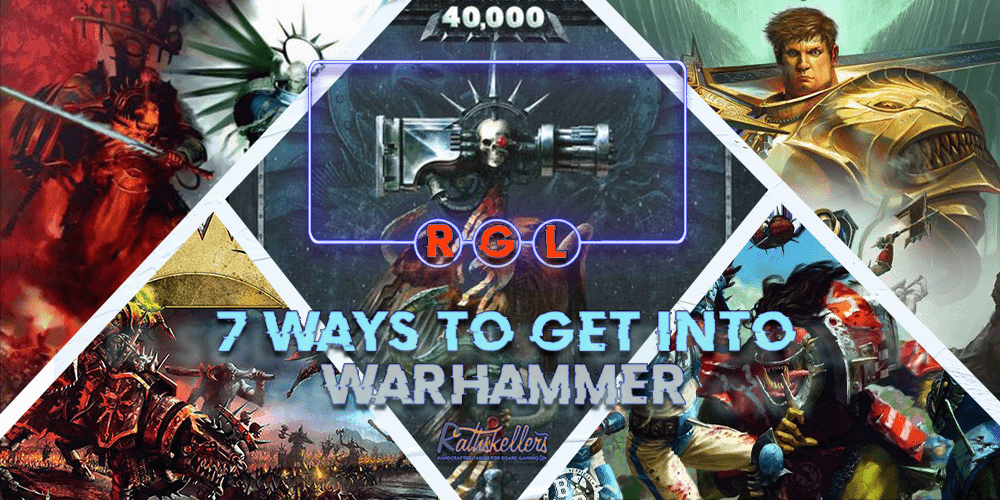 7 Ways to Get into Warhammer

For those brave enough to try The Hobby, you may be spoiled for choice…and a little intimidated. In operation since 1975, Games Workshop’s flagship Warhammer brand is undergoing an unprecedented resurgence in popularity – combining model making, painting, and wargaming into one glorious package. But with so many choices available, and a significant monetary value attached, it can be difficult to know where to start.

So, here are seven great games to try and see if they are right for you. You know, before you destroy your wallet. Starting with-

The grim dark mother of them all. Now in its 9th edition, the latest version of the series has received attention for streamlining its rules, expanding on a universe that was close to stagnation, and creating some genuinely astonishing models to field on your table. The start of the series however is the wide range of starter sets for the series, with three options for new players to match every price point. These range from the brilliant ‘Recruit’ set that comes with a generous range of models to the gargantuan ‘command’ edition that features plastic scenery and everything you need to start a Space Marine or Necron force with ease.

6. Middle-Earth Strategy Battle Game: The Lord of the Rings – Battle of Pelennor Fields (2018)

And for those familiar with the graceful beauty of Peter Jackson’s expertly crafted vision, players can field all the armies of Middle Earth in this officially licensed tabletop skirmishing game. First released to coincide with the original films, the rules (and available miniatures) have significantly expanded to allow you to enact every battle and conflict in the series. Clash with the Ringwraiths on Weathertop. Face down Saruman in the scouring of the Shire. Combat Smaug as Rivertown burns. Or pick up the generous Pelennor Fields set to see Theoden face down the Witch King…possibly while uttering “they have a cave troll” every time your opponent moves the goliath unit included in the box.

A mainstay in the company’s back catalogue for a reason. Now in its fourth edition, the game pits the might Space Marines against an army of crawling Genestealers. Watch as the Emperor’s finest attempt suicide mission after suicide mission and groan helplessly as their alien enemies crack their ceramite armour open like a can of peaches. Taut, fundamentally unbalanced, and dripping with theme – Space Hulk was a rite of passage for many British gamers and now any fool with a power axe to grind can board a deadly space hulk and take the fight to the opposition.

A slight curveball on our list, the Warhammer Diskwars series was produced in collaboration with Fantasy Flight in 2013 that – despite being an amazing adaption of the company’s fantasy battle series – failed to land and was cancelled after two expansions. While discontinued, sets are easy to find online through individual sellers and eBay vendors. And let us tell you, it’s worth it. With units represented on cardboard disks, players are quickly able to field armies with massive points values and cut a great deal of the fluff from the game and hold gargantuan battles that would cost close to four financial figures to realise in real life. Though this may require an appropriate gaming table or a felt covered space (essential when it comes to moving the disks) its inventiveness shines through even now. And with the Old World setting that has been supplanted by the newest version of the Universe, dipping your toe in the darkness of the fantasy universe has never been more appealing…

American football your thing? No? What if we told you it had orcs? A mainstay of Games Workshop’s line for decades, Blood Bowl is a game of surprising tactical depth while also encouraging teams to just batter each other mercilessly. With a low figure count, games are easy to field and the rules can be learnt at speed and applied just as easily Or if you prefer a game that plays in a fraction of the time but sacrifices none of the tactical complexity, the recent release of Blitz bowl can let you dip your toes and see if the line is truly right for you and your opponent of choice.

A stunning card game masquerading as a miniatures skirmish, Underworlds has very quietly proven to be Games Workshop’s crowning achievement since its launch in 2017. Playing up to four (or an insane six with the latest expansion for the Beastgrave block) the game plays quick and rewards tactical nous, strategic competency, and brave plays. Pitting two warbands against each other, players undertake a lean sixteen actions across the game with cards allowing for additional opportunities to score glory or knock some heads. With parties ranging from a bunch of goblins on wolves, a giant troggoth, or a team of skeletons that just won’t stay dead. Perfect for forming your own meta and eminently affordable, the series is the perfect pick for players of all backgrounds.

Ok. Now. Bear with us. With all of the disruption currently occurring around Covid it can be close – if not impossible – to gather your friends around a table and smash each other’s armies to smithereens. Thankfully, every nerd at the planet is on hand to help. While no substitute for sitting down with your frenemies and having at it, the game includes a mass of armies and all the templates, dice, and rulers you need to hold a clash with confidence. Players are currently hard at work modelling each of the game’s unique armies and streamlining the game’s finicky control mechanics. This lets you field a light skirmish, an Armageddon scale battle, and even bring colossal titans to the field. And, once your finished, you can cool down with a little real-world model painting and prepare your team for battle IRL.

Do you have any other ways to recommend?! Share it in the comments below 🙂